Know with us how to cook the famous goosei food

How to prepare goose with chicken: 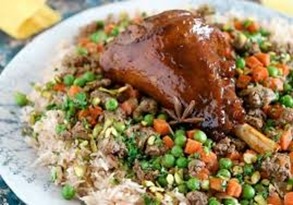 We wash the rice under water and add an amount of warm water to it, and keep it soaked for half an hour, then filter it from the water.

We bring a pot and put enough water in it and put it on the fire until it boils, then add chicken pieces, parsley, tomatoes, two sliced ​​onions, then chopped garlic and pepper, we put salt as desired, cardamom, cinnamon, bay leaf, saffron, ginger and a tablespoon of spices Turmeric and leave the chicken for an hour but a quarter of the fire, to simmer.

Bring a tray and put the chicken on it, then spread the chicken with tomato paste, which was mixed with milk and leave it aside.

We put the oil in a bowl over the fire and add the meat to it and stir the meat until the water dries, we add the finely chopped onion and turn them all until the onions wither.

Add the rest of the ingredients to the mashed garlic meat, spices, salt, cardamom and black pepper, then add the rice and stir them. After filtering the chicken broth, we pour six cups on the rice, then we leave the rice on the fire until the broth boils, then we reduce the fire and leave the rice until it is completely cooked.

Now put the chicken tray in the oven at a temperature of two hundred degrees Celsius, and leave it for ten minutes until it becomes golden. Serve the rice and place on top of the fried chicken pieces, decorate it with almonds, pine nuts, and wellness.

How to prepare goose with meat: 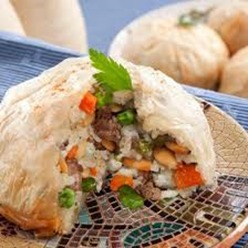 Five cups of Yamal Sham rice.
Four cloves of garlic to prepare ground meat and vegetables.
Spoonful of salt.
A teaspoon of ground cardamom to cook rice.
Three tomatoes.
A spoonful of mixed spices to taste.
A tablespoon of curry.
Atom as desired.
A kilo of fresh or frozen peas.
A quarter cup of olive oil.
Spoon of ground ginger.
Half a kilo of islands.
1 tablespoon of ground cinnamon.
Sticks of cinnamon number three and three leaves of laurel and four unmilled Hill grains for boiling chicken.
Head onion.

Boil the chicken with onions, cardamom and bay leaf, and leave it for half an hour until done. We cut the carrots into small pieces and put five tablespoons of oil in a bowl over the fire. We could soak the rice with lukewarm water for a quarter of an hour.

After the chicken has ripened, remove it from the broth and put it in a tray in the oven for frying. We filter the rice from the water and put it over the peas and carrots without stirring. And leave it on fire for a quarter of an hour to simmer.

To serve, bring a wide bowl and turn the pot in a bowl, put the minced meat on top and garnish with almonds and pine nuts, and bring the yogurt alongside it with yogurt or a platter of vegetables.