Know with us how to cook the kabsa dish

The kabsa is a meal that consists mainly of long-grain rice, which is served in the Arab Gulf countries, and is the main meal in Saudi Arabia and Kuwait, and the kabsa is often cooked with lamb or goat meat or with chicken, and meat, ghee, nuts and raisins are placed with it and served in many Arabic dishes.

How to make Kabsa 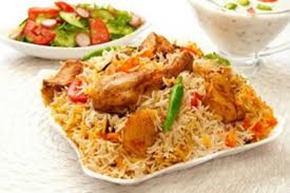 Tablespoon of corn oil or ghee.
A quarter of a teaspoon of turmeric.

We wash the rice under cold water, and soak it in warm water. We cut each chicken in half, with a kitchen knife or scissors. Stir coriander, cumin, salt, black pepper, turmeric and spice in a small bowl until all spices are mixed.

Sprinkle a teaspoon of spices over the chicken, and then stir it until it is covered with seasoning.

Now put the ghee in a large skillet, then heat it over medium heat, add the onion pieces and stir for a few minutes until golden. Then we add chicken nuggets, wait a few minutes, turn the chicken on the other side and wait for it to turn light golden in color.

We put the chicken in the water and let it simmer over medium heat for fifty minutes. After the end of the period, we remove the chicken from the broth and add a little olive oil and turmeric to it, then put it in the oven tray and leave it for 15 minutes until browned.

Then we put four and a half cups of broth on the fire until it boils, then add the rice and stir lightly, and we leave the rice boiling on the fire until holes are formed on its surface, and leave it on low heat for forty minutes until it is tender.

After the rice is done, we put the platter and put chicken over it for decoration, and the yoghurt or salad plate is served next to it.